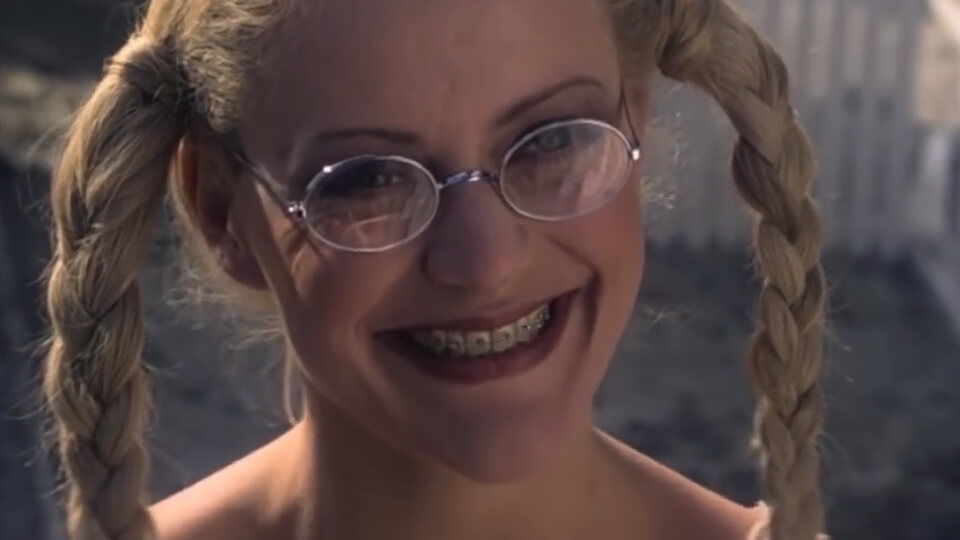 Many people recall Dolly having braces, when it fact she does not. The image above is a screenshot of the following YouTube video produced by ROMTHIRTY, a visual effects artist:

It does a pretty good job recreating what some people thought they remembered about the scene and Dolly, although some remember even bigger braces according to many of the comments on the video. In reality, she does not have braces at all, as shown in the following media: 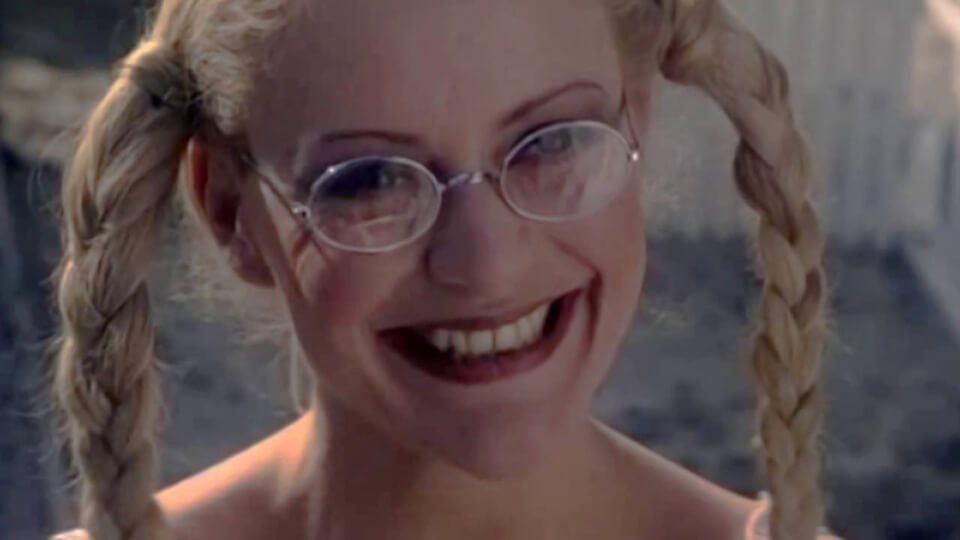 There has also been other reports of changes as well besides the braces. Some remember her with less cleavage (less sexualized), having thicker black-framed glasses, or a scene where her braces get stuck in Jaws’ teeth when they kiss. All of these are a pretty good clues at what may be happening here.

James Bond fans seem pretty split on this. A Twitter poll from M16 (a popular James Bond fan site), revealed that 47% of respondents chose “Braces” when asked “What factor first attracted Jaws to Dolly in Moonraker (at first sight)?”. They later wrote an article on the result and their thoughts on the Mandela Effect, and concluding with, “MI6 can confirm that no change has been made to the film. The actress who played Dolly, Blanche Ravalec, did not wear braces in the film. This has been corroborated by others on the production as well as original still photography taken on set.”.

Recently, in a text conversation with Laurent Perriot, Blanche stated that she did not wear braces in the movie. 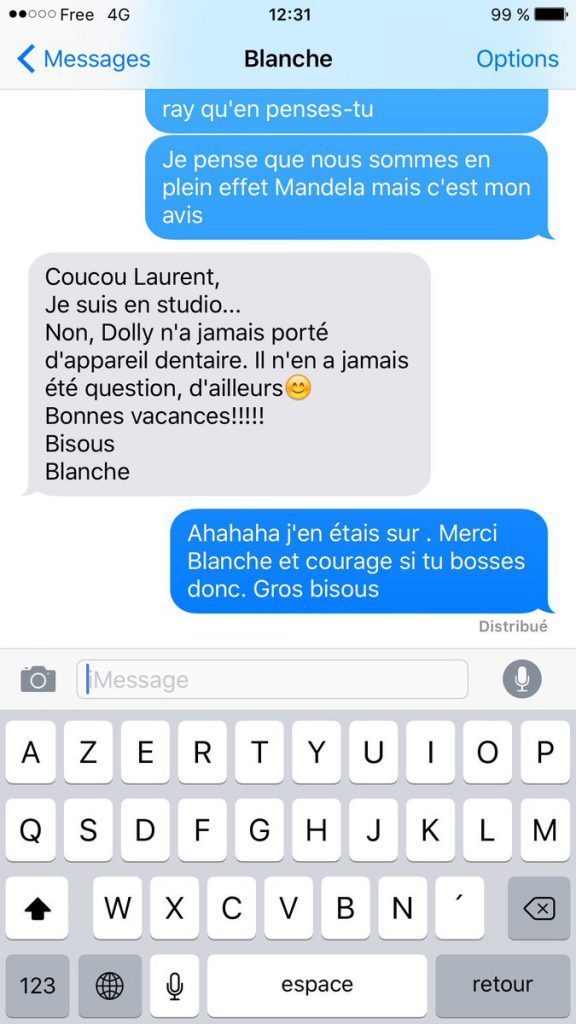 Hello Laurent,
I’m in the studio…
No, Dolly never had braces. It was never even a question.
Happy holidays!!!
Kisses
Blanche

Many have claimed she had to have braces based on semi-parody of the scene above in a commercial where Richard Kiel (Jaws) meets a cashier with braces:

Substantial examinations have taken place with the footage of the film, and in one case, Barrie Reader, claims that the film has been altered in some way. Although he draws this conclusion, many criticized his conclusion, including myself. Many of the details he has pointed out could be the result of compression artifacts, lighting, optical illusions, clustering illusions, or the fact that we are talking about a 35mm analog film (that was subsequently blown up to 70mm) shot on a Panavision Panaflex. Analog films are prone to dust, scratches, blotches, laboratory (developing) errors, and general graininess. Many of these film issues would have attempted to be corrected on the DVD/Blue-ray releases, perhaps even through automatic, error-prone methods (denoising). The conclusion appears to be an example of confirmation bias more than anything.

The origin of this Mandela Effect seems to be quite old, with one poster (Matti Lamprhey) all the way back in 1999 asking if they were misremembering this detail about the film. This instance appears to be the earliest (recorded) example of the effect.

Another very old example exists on the oldest 007 fan site, Universal Exports, which states “The complete opposite of Jaws, Dolly is a short blond girl with pigtails, glasses and braces.”. This instance is even stranger as the image they used clearly shows no braces. 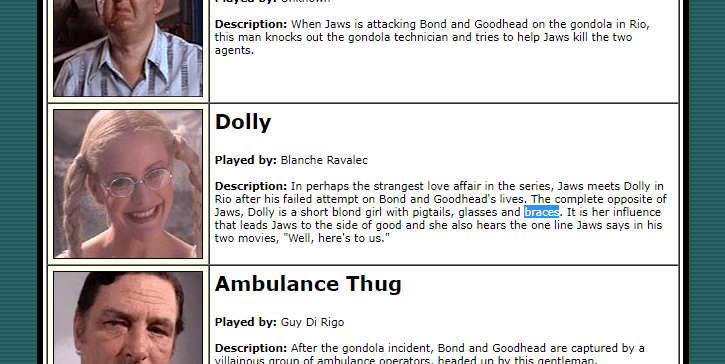 I am not affected by this Mandela Effect. Even though briefly going through a Bond phase as a teenager when the Nintendo 64 game, GoldenEye was a huge thing, I never managed to watch Moonraker back in the VHS-era. My memories of the movie are much more recent, and without the braces.

There’s no denying the prevalence of this belief. It seems to be a very common Mandela Effect, peppered throughout the internet through articles, descriptions, message boards, and as far back as 1999; although I doubt that is the oldest instance of this belief. What could possibly be happening here?

I think stereotypes are playing a big a big role here. People see a nerdy-looking girl with glasses and pigtails. What else do nerdy girls have? Braces. One commenter remarks, “I remember huge braces, the ones that like Jan wears In the Brady Bunch Movie”. Some other commenters have also stated they remember her being less sexualized, and having thick black-framed glasses. More things that fit into the “nerdy girl” stereotype. This is a possible confabulation with nerdy stereotypes common in media.

It also just makes sense. The scene where Dolly and Jaws meet. Jaws smiling, opening his mouth, revealing his grizzly cog-like metallic teeth, then Dolly following suit, revealing her own metal augmentation. Love at first sight based on their common metallic dentistry! The order is important here though. Jaws smiles at her first. Jaws likes her before even seeing her teeth. This is because she is an attractive female, not because she has braces. It would be an awesome explanation at their common attraction though.

The age and quality of the film may also play a role. Many watched this film originally on grainy VHS tapes or fuzzy tube televisions. It’s not possible to see every minute detail. We fill in those details with our own imagination, possibly to the detriment of reality.

Some may be confusing the scene with the Finnish commercial parody, although, I would guess this is not likely as it would be a very select subset of people that saw this before already having the belief that Dolly had braces.

37 thoughts on “Dolly Has Braces”